His perpetual cycle of successfully getting sober, only to relapse four to six months later was too painful and disappointing to bear. What was the point of even trying to get out of his dark place?

With a deep family history of alcoholism and addiction, Joey began abusing alcohol and drugs as a young teen. He got sober at 18 when he joined the military and stayed sober for 12 years throughout his service time with the 3rd Armored Cavalry Regiment in the Gulf War.

Once, his sergeant gave him a direct order to drink, but Joey refused. He says, “In a Scout platoon you don’t trust the man who doesn’t drink.” Still, he made corporal pretty quickly during his three years of active duty, and received many military commendations and achievement medals. He’s also a member of the Order of the Spur.

The devastation Joey experienced in Kuwait – “imagine leveling the land from Hartford to New Jersey [with 13 ton bombs] and tell me what you see” – brought on PTSD.

After the military, Joey went to college, got married, owned a house, and ran a business. A traumatic brain injury (TBI) from a motorcycle accident – one of several TBIs – and the resulting short-term memory loss and vision issues, as well as the ending of his marriage, drove him back to alcohol.

It took Joey a while to realize he was drinking to numb PTSD symptoms. 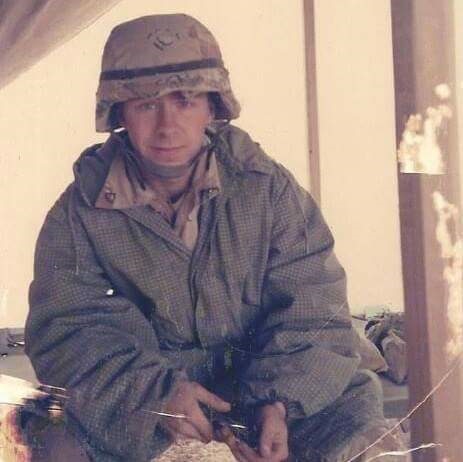 His PTSD presents itself in several ways, including self-isolation, hearing things, jumpiness over loud noises, nightmares, insomnia, and anxiety in large crowds. He feels the need to count his steps as soldiers do while out in the field, and he almost got hit by a truck once when he walked into the street, completely oblivious to his surroundings.

Joey was brought to the VA for the first time after a Vietnam veteran he was staying with committed suicide. Since then, he’s gone through the VA’s substance abuse day program (SADP) six or seven times. He has had 4 detoxes, staying only for short stints at every detox program he’s entered – the longest was 10 months.

It wasn’t until recently, when he went to an intensive six-month treatment program for PTSD and TBI, that Joey realized his issue lay in his trying to manage all of his diagnoses the same way. “They’re different creatures,” he realizes now. In addition to PTSD, TBI and alcoholism, Joey has been diagnosed with major depressive disorder. His symptoms of depression and PTSD are more manageable sober. He relapsed for about a month after leaving the program, but came to his senses after he thought about all the hard work that would be undone.

“I don’t have to stay on this elevator until it goes all the way down.”

Continuum has given me a place to get organized and engage properly, and people to bounce ideas off of. It’s a   matter of me saying, what do you need me to do to be in a place where you can help me?”

Now, nearly two months sober, Joey’s looking forward to going back to school, finding a part-time job, or volunteering at the VA. “The VA has really picked me up several times, and I thank God for that.” To remain positive, he tries to do a good deed every day – even as small as picking up litter – and writes thank you letters to all the people who have helped him. That he’s participating in his family’s life again means more than anything to him.

But that’s okay. It’s all about adjusting and adapting to whatever life brings your way. He tells his comrades that if they fall, “the blessing is in making it back.”

Won’t you consider a gift to Continuum to help a Veteran like Joey recover from PTSD?